LUMBERTON, N.C. (Feb. 19, 2019) – If the breakfast biscuits baked at the Hardee’s® restaurant at 3007 W. Fifth St. taste delicious, that’s because they are made by a Biscuit Maker Champion.

Local Hardee’s biscuit maker Juanita Davis was named as the 2018 Best Biscuit Maker of Boddie-Noell Enterprises, the largest Hardee’s franchise operator in the nation. Davis advanced beyond more than 700 other biscuit makers at 347 Hardee’s restaurants across four states to win the overall award. Davis was also a regional finalist last year and was named the top biscuit maker in the company for 2015.

Boddie-Noell honored the four regional winners and announced Davis as the overall winner during a banquet at the company’s Rose Hill Plantation near Nashville, N.C.

“I want to thank everyone for supporting me,” said Davis. “I feel like a superstar.”

Davis says the key to creating the best Hardee’s Made from Scratch™ biscuit begins with “always following the procedures.” Her favorite Hardee’s biscuit is a chicken biscuit.

Davis and the three other regional winners will be featured later this year in photos on the in-store tray liners at all Hardee’s restaurants operated by Boddie-Noell.

The competition started in October, and each biscuit maker was evaluated based on the quality of his or her biscuits, knowledge of proper biscuit equipment, cleanliness and care of the biscuit equipment, knowledge and execution of company procedures, grooming and appearance. The competition’s judges included general managers, district managers, regional directors, vice presidents and other executives in the restaurant division of Boddie-Noell at the five levels of competition.

Davis has worked as a biscuit maker at Hardee’s for 18 years.

When she isn’t making biscuits, Davis enjoys going to church, shopping and spending time with her family. She has four kids and 12 grandchildren that keep her busy.

Hardee’s Made from Scratch™ biscuits, which have been served at Boddie-Noell restaurants since 1977, are a vital part of the restaurant’s menu.

In 2018, Hardee’s restaurants owned and operated by Boddie-Noell used more than 8,178,000 pounds of biscuit and cinnamon raisin mix, 585,500 pounds of flour and 688,500 gallons of buttermilk to make the golden brown biscuits. 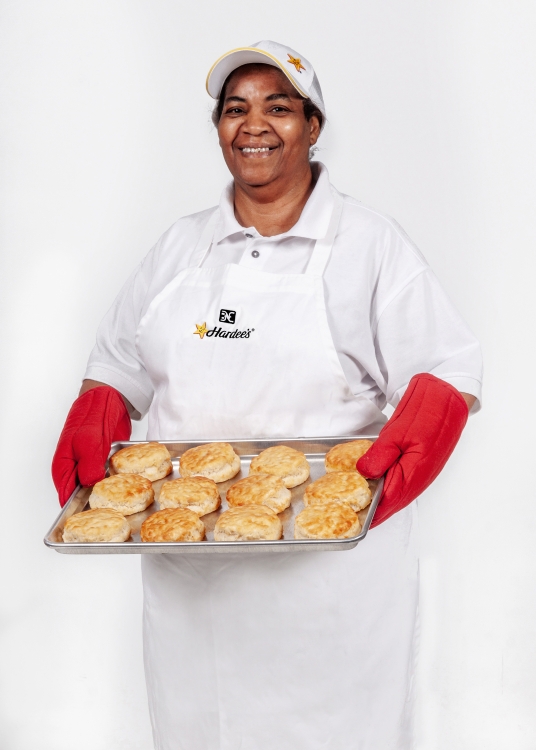 Join our talent community and sign up to receive email job updates.